Whether you call it Weiss or Weizen, it’s always the king of summer.

During the hottest months, this light, mildly alcoholic, sweet, and creamy beer can win anyone over, not just beer lovers.

Thanks to how easy it is to drink, how refreshing and thirst-quenching it is, and it’s champagne-like bubbles, every year it’s voted among the summertime best-sellers, and not just in its hometown of Bavaria.

It’s name already tells us a lot about it: Weizenbier or Weißbier, literally “wheat beer” (together with Blanche, Gose, and Grodziskie) or “White Beer” (not because of its characteristic milky color, but because of the color of the wheat). That’s right, because contrary to most beer styles, it’s not produced with barley malt, but rather with at least 50% (and even up to 70%) malted wheat.

THE EDICT OF PURITY…IS A MASSIVE LOAD OF C**P!

It’s an ancient product, like all of the few survivors of the high fermentation brewing style in Germany, the unquestionable homeland (since the 15 century) of low fermentation beers. Some proto-Weizens, or other wheat beers, already existed in Hamburg in 1410, which were then copied by master brewers in Berlin (the well-known Berliner Weisse, add it to you list!), Hannover, Vienna, and Bohemia, however it was only in Bavaria that these developed into a true style.

But in Germany (you’ll say)… wasn’t there the famous Reinheitsgebot, a.k.a. the Edict of Purity? …which, among other things, imposed the exclusive use of barley in beer production?

It’s a wonder that they survived and reached the present day safe and sound. The elusive, and almost always misquoted, Ingolstadt edict, of 1516, by Duke William IV of the Wittelsbach family, effectively imposed on the duchy, then on all of Germany, the exclusive use of this grain in beer production, condemning the country’s many historic beer styles to extinction. With just a few “ifs”…

Of course, because special licenses for certain incriminating styles were granted to nobles and clergy (noblesse oblige). Case in point: our Weizen. Simultaneously to the edit, William conceded an unicum to all of Bavaria. He granted a commercial monopoly to the Degenberg family (who made a lot of silver thalers), already ministerial officials of the Bogen Counts, as well as the title of “baron”, in order to seal their loyalty and alliance, thus saving, albeit involuntarily, our endangered brew “panda” (and without bothering the WWF).

Good luck is blind, but bad luck has perfect vision, and less than one hundred years later, in 1602, the family was left without male heirs to carry on the lineage, something which is fundamental for succession according to the strict dictates of the Geschlossener Hof, or the Entailed Farm Law (basically… the first born son gets everything!).

It was another time, in which gender equality didn’t even exist as a passing thought, and the new Duke of Bavaria, Maximilian the Great, seized the opportunity and claimed the Degenberg’s land, castle, and rights for himself. Game over.

Weizen therefor returned to the capital, and continued to be produced, and sold, in a new brewery, located in the center for the city and specially constructed by the Wittelsbach, with the evocative name of Weisses Bräuhaus (Weizen brewery). 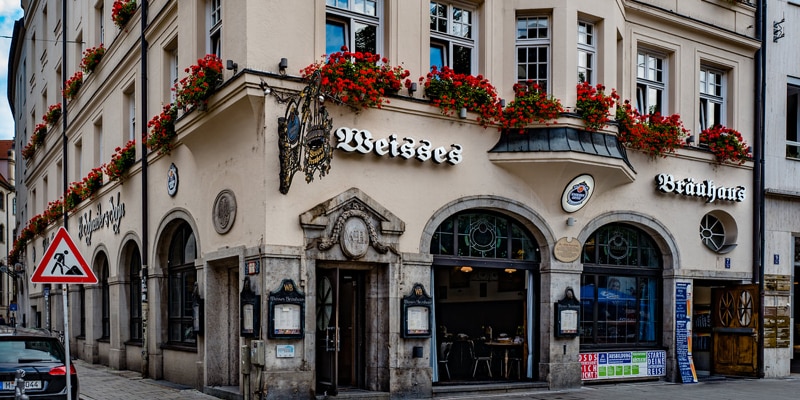 THE BIRTH OF A LEGEND

But the world of beer has also always ben susceptible to trends, and the popularization of Lager styles in the 19th century in Germany and the rest of the world, the München Dunkel in primis, made the Weiß lose some of its luster.

The high fermentation beers in Bavaria, in the decade from 1860 to 1870, dropped from 68% to 2% of the market. As a result, it made no sense (or money) for the royal house to maintain a monopoly. Thus, in 1872, Duke Ludwig II (sometimes called the “Fairy King”, who lived in the caste which inspired the famous Disney castle and was more attracted to courtiers and stable hands than to saving the country from bankruptcy) rented out the new brewery and the recipe to master brewer Georg Schneider, who, together with his son (Georg II), purchased them several years later, founding the Weissbierbrauerei G. Schneider & Sohn, or simply Schneider.

I don’t know if our Steve Jobs of this Germanic brewing style (and the entire lineage of beers to come) was more crazy, stubborn, or delusional to fixate on a beer that, by then, had lost all popularity.

The fact remains that the Schneiders had to wait a whole century, until the 1960s, surviving the destruction of the brewery in the 1944 bombings and continuing stoically to produce white beer, for Weizen to came back into fashion and eventually become an unquestionable symbol of Bavaria. “Time is a gentleman”, as Voltaire taught us, and perseverance is rewarded, with Georg’s very first white beer (which became his “Number One Dime”) ultimately shaping today’s Weiß style, now recognized in the BJCP (a.k.a. the beer taster’s bible).

What are the characteristics of a perfect Weizen?

This beer, with a #Generous character (and if you still don’t know what I’m talking about, hurry and take the Taste Test! You might be the only one who hasn’t yet…), must be light in color, between straw and golden yellow, with a creamy and long-lasting foam, a pronounced bubbliness, and a characteristic aroma of banana (a blessing and a curse), banana, and… did I already say banana?

Plus notes of clove, vanilla, and a hint of bubble gum (think Bazooka Joe).

Bitter? N/A. It’s these very characteristics (banana and the absence of bitterness) that make it the most bullied beer on the planet by beer-geeks.

In actuality, following in the footsteps of the Schneiders, now, for the record, at Georg VI (ah… how creative the Germans are!), every Bavarian beer, starting with the “Six Sisters” of Oktoberfest , has reintroduced this style in its core-range, and some like Benedektiner, Erdinger, and Franziskaner produce exclusively Weizen and are absolutely worth trying.

Don’t be a dummy! Even in the world of craft beer, including in Italy, we find prestigious examples: from the Hefe Weizen of San Gabriel, to the Domm of Lambrate and the Beat Weizen Generation of Birrificio Indipendente Elav.

Careful though, after 150 years it’s no longer enough to say Weizen… there are now styles and sub-styles to satisfy every taste. 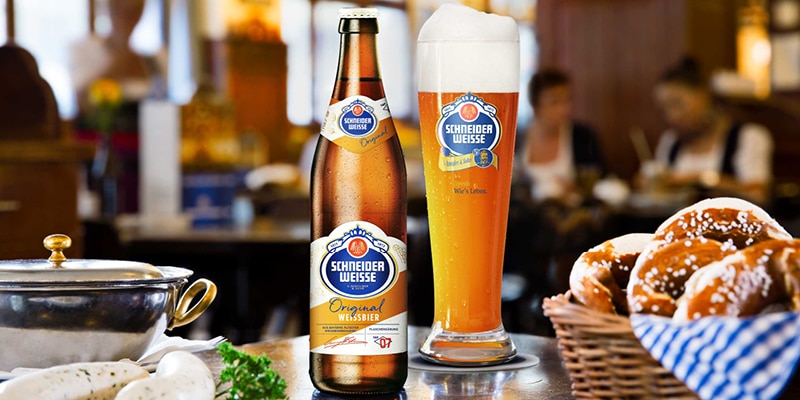 WHERE TO DRINK THE BEST WEIZEN IN MUNICH

Worried about getting lost or ordering the wrong thing?

Don’t worry, I won’t abandon you. That’s what I’m here for, a modern-day Virgil, to take your hand and guide you through them.

First of all, the most important distinction is between Hefeweizen (weizen with yeast), the more famous, turbid, and traditional type, and Kristallweizen (crystalline weizen), clear and sparkling. And, before ordering your beer, remember:

You might also find Weizenstark (strong weizen) or Leichtesweizen (light weizen) on the menu, traditional generic, and typically German, classification terms for any Weiß with an ABV higher than 6.5% or less than 4.3%, respectively.

I refuse to say anything about Weizen-alcoholfrei. And since it’s summer and Munich is only a 2-hour drive from Italy (a 1-hour flight from Milan or Venice)… why not celebrate the anniversary in the place where it all began?

It’s the perfect occasion to visit a beautiful city (Ich liebe München!) and to take a detour between one Weizen and the next.

That’s right, because in the center of the city, between a bretzel in Marienplatz and the must-visit Deutsches Museum, the main beer companies each have their own pub, in addition to the biergartens which are now in full swing (as I previously mentioned), all of which can be reached by foot or Metro.

Be careful though, given the high consumption of beer and heightened tourist traffic, some have more than one location, and (trust me because I’ve been to all of them) it’s worth heading towards the historic locations like Hofbräuhaus am Platzl, Augustiner Stammhaus, Paulaner Bräuhaus, Ayinger am Platzl, Der Pschorr (or, your choice, Hackerhaus, once Hacker & Pschorr were two distinct breweries and the separate historic pubs still remain), Andechser am Dom, Spatenhaus an der Oper, Löwenbräukeller, Gasthaus zum Erdinger Weißbräu, or  Zum Franziskaner.

Places which, though a little noisy, are full of allure, tradition, and history: wooden tables, cockades and garlands, and the characteristic waiters in Dirndl, from whom you can order, in addition to a beer, traditional Bavarian dishes, like Schweinshaxe in Biersoße (the famous pork shank in a beer sauce) or Schweinebraten mit spätzle (Bavarian roast pork).

In addition to the big names, also in the city center and only for true beer nerds, you can find small traditional and independent breweries, like Forschungs, Isartaler, and Tegernseer, or newer craft establishments like Schiller Bräu, Giesinger, Higgins Ale Works, BrewsLi, and True Brew.

WEISSES BRÄUHAUS, OR WHERE IT ALL BEGAN

And, the icing on the cake, Schneider Bräuhaus Im Tal (that’s right, the former Weisses Bräuhaus of the duke!), where it all began 150 years ago.

11 different Weizens are waiting for you in a splendid setting, from 8am to 12am, 7 days/week. Would you like one last recommendation? Well, over these past 30 decades Schneider hasn’t produced only “old school” style Weizens, but has also been a great innovator, inserting limited editions and Weiß with hops in its repertoire.

Three must-try and unconventional labels, available this year, are: Nelson Sauvin, produced with the New Zealand hops by the same name (flowers, citrus fruit, grape, mango, and lychee), Love Beer (flowers, citrus fruit, elderberry, and Sauvignon Blanc), and finally Festweisse, an ancient family recipe, with Cascade hops (grapefruit, flowers, and spices), invented for Oktoberfest in 1880 and only served until 1895, before the arrogant “Six Sisters” acquired the monopoly. 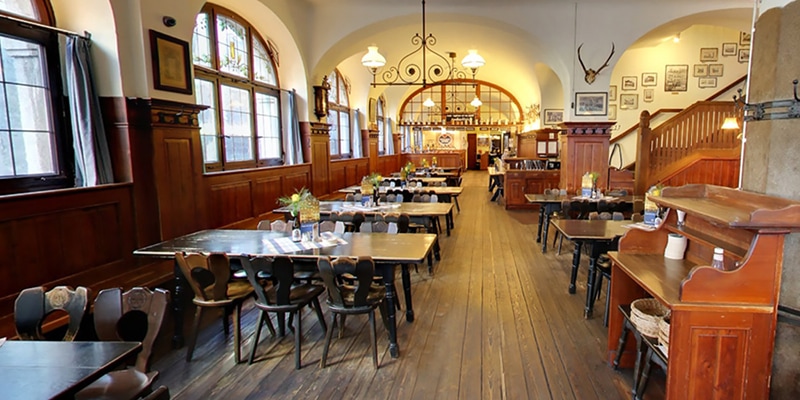 And if you’re free the weekend of July 22-23-24, and you feel like heading about one hundred kilometers north, to Kelheim, established in 1927 and the Schneider headquarters since 1944, get ready for 3-days of music, beer, and performances, directly at the brewery, to celebrate their 150th anniversary.