MAY HAS ITS BEER TOO: INTRODUCING MAIBOCK What if I were to ask you to finish this sentence: “May is the month of…”?

Your answer would probably be along the lines of “brides, new mothers, roses, or Madonnas (the lily, not the singer…)”. BZZZZZ!!! Wrong answer! (With the utmost respect for all of the contenders.)

May is the month of…beer!

Beer has evolved over thousands of years and, over time, has given us a large number of seasonal beers: beers that are brewed only during certain times of year, or for specific occasions or holidays, during which the artistry of the master brewers has created a particular product for celebrating an event that’s meaningful to a community. In Italy too, thanks to the brewing revolution that’s taken place in recent years, we have become familiar with seasonal beers (just think of the renown Christmas beers).

Here you are, ladies and gentlemen: Maibock, the beer of May.

Also known as Heller Bock (a lighter, literally luminous, Bock) or Helles Bock (light Bock), it’s one of the many sub-styles of the more popular and well-known Bock, which is also known (more correctly) by the name Dunkel Bock (dark Bock), precisely in order to set itself apart from the others.

It’s a beer with an #Intriguing character (and if you haven’t yet taken the Taste Test… do it now!), with a full body and high percentage of alcohol and a flavor that’s perfectly balanced between sweet and bitter. As compared to the traditional version, it generally has a lighter, golden/amber color (at least in its current version, created in the second half of the 19th century, following the worldwide trend of light beers), a higher presence of hops, and is dryer.

AN IBEX IN THE GLASS

The Bock was first created in Einbeck, Saxony, and is an ancient beer which had already been codified by local Braumeisters in the 14th century with the name of Einbecker, or Einbeck (“beer” was implied), and was distributed and popularized from the Baltic Sea to Bavaria. It was here that, in 1614, Elias Plicher, Master Saxon Brewer, was called upon by Duke Christian I of Zweibrücken-Birkenfeld-Bishweiler Wittelsbache to (re)produce it at the Staatliches Hofbräuhaus (literally the Court’s State Brewery), or rather the private ducal brewery, today better known as Hofbräu, or simply HB.

The beer was named, in Boarisch, Ainpöckischer (from Einbeck). The Bavarian pronunciation then began to distort the name, first in Oanpock and, subsequently, perhaps due to alcohol slurring their speech (I confess to having experienced this), in “Ein Bock”, a Bock, which in German happens to mean ibex/wild goat (marketing before marketing was a thing; what better name for a riskless male beer?), produced in order to be ready for May, hence the name Maibock.

A MAIBOCK FOR MAIFEST

Yes…but why May specifically?

Well before the (highly commercialized) Mother’s Day and the (religious) Marian Feast Days, with an incredible thousand-year old fil rouge tying them all together, May was the month of Walpurgisnacht (Walpurgis Night), one of the eight sabbaths of the Wheel of the Year, one of the four major ones to be precise, which mark the passing of time in the Germanic-Norse pagan religion.

This period, exactly halfway between the spring equinox and the summer solstice, is the month of fertility, prosperity, light, blossoming, and the rebirth of nature.

Aside from the name, it’s not so different from the Gaelic Beltane or our, more famous, Calendimaggio (the evolution of the Latin Floralia, the celebrative games in honor of Flora, goddess of Spring, flowers, and all fruit trees. Imagine that!), which is still celebrated, from Lombardy to Molise, in many local folklore festivals. It was Gregory Magno, the evangelizing pope of Europe, who, in an epistle dated July 18th, 601, maintained that the church needed to welcome the traditional pagan customs and holidays, transforming them into Christian liturgies. And it is thus that the Maifest (Festivals of Mai, anciently known as Wunnimanoth, the month of pastures), organized in Germany by the Brauchtumsgruppen (Custodians of Tradition… no, they aren’t characters from the world of Marvel and they don’t have blasters or element guns), has survived to the present day, along with the need for a seasonal celebratory beer, notably the Maibock! 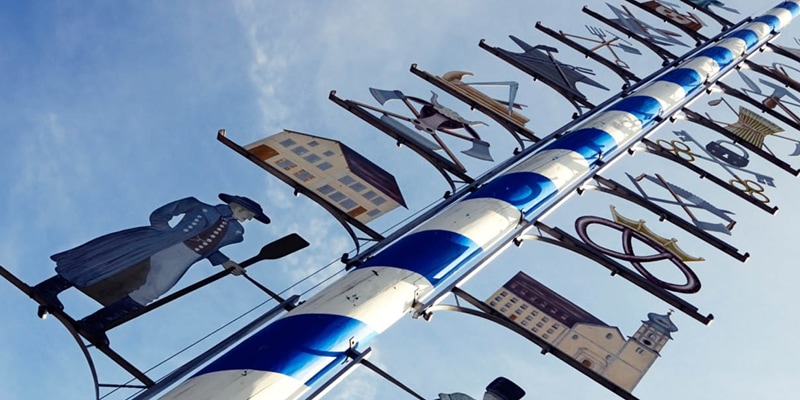 NOT JUST THE XMAS TREE

The unquestionable symbol of these festivals is the Maibaum (May tree) or the Maipole (May pole).

A tall trunk, measuring 20-40 meters tall, was raised in the town square, decorated with green branches, wreaths, ribbons, and figures carved into the wood, representing the spring and an auspice of fertility.

I’m certain that, without even realizing it, you’ve already seen one, in its modern and prosaic version, at the entrance to a brewery or pub, during beer festivals, in some commercials, and in films, perhaps with young men and women dancing around it holding long colored ribbons. Finally, votive offerings were hung from the top (the origins of the game of the Greasy Pole...).

The Maibaum has remained nearly intact, losing, however, its sacred meaning, including the orgiastic fertility rituals (you got here late… timing is everything…), but you can always console yourself with a Maifest, with music, dancing, BBQ, and above all…rivers of Maibock! The ones that you can’t miss are those in Stuttgart and those in Munich, which both end on May 8th, but you can find others through to the middle of the month.

If you hurry up you can still make it, but, if it’s just impossible, you have all of spring to make up for it, ordering a Maibock in a German Gasthof or Braurerei. 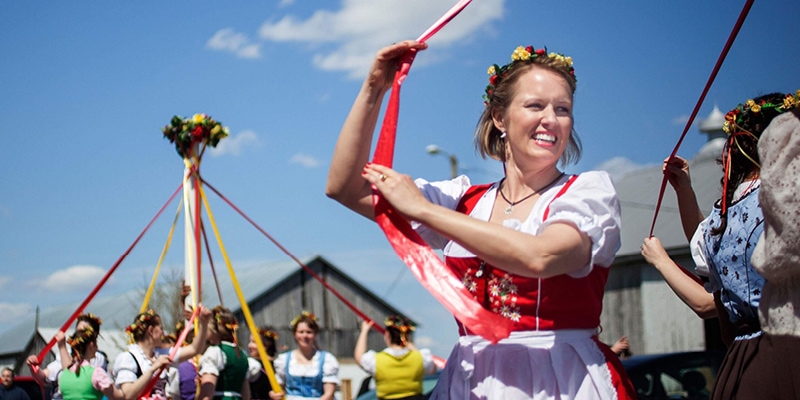 How? Which to choose? Three stand out above all the rest:

According to legend, as we’ve seen, it’s the forefather of its kind; a true German Starkbier (a term which includes, without exception, every strong German beer) with 7.2% ABV and an amber color full of copper highlights, characteristic of the ancient version. If you happen to be in Munich, in the area of the Platzl, you could enjoy the unique experience of drinking at the Hofbräuhaus, where it all began. Here’s to the Duke!

A historic brewery, founded in Einbeck in 1873, from the fusion of two breweries who had the production rights to the original local beer. Their Mailbock, golden, bitter, and with 6.5% ABV, represents the other half. If you happen to be here, from Monday to Thursday, with just €15 you can taste it while enjoying a guided tour of the historic brewery; reservations are appreciated.

We couldn’t leave out the Stuttgart version, could we?

This brewery, founded in 1878 and now acquired by the Dinkelacker brewery, also in Stuttgart, has only once again started serving its own golden-blonde version, with 6.9% ABV, since 2008. The group, which as of today has absorbed six of the city’s historic breweries, also produces a light version with only 5.9% ABV: the Dinkelacker Maibock.