CHRISTMAS AT HOME, EASTER AT A BIERGARTEN! Imagine this: wide sandy beaches, crystal clear water, toucans and parakeets chasing each other through the tops of tall palm trees, the sound of the undertow lulling you to sleep, the tropical sun, the scent of sunscreen on your skin, and a gentle breeze ruffling your hair. Nice, right?

Great, well in Germany you can forget about all of this.

An average winter temperature of 0°C, a low temperature of -27°C, freezing air currents blowing in from the Atlantic, from Scandinavia, and even (bring it on) from Siberia (and without mountains to defend it since Germany is as flat as a surf board), a high temperature of 5°C, and rain one out of three days (when it’s not snowing heavily).

This is clearly a habitat that’s more suitable to hiding away in a sauna than socializing (just think of a time before Netflix). The average German yearns for Spring like an oasis in the desert, specifically for April, when the hunting season opens once again and people go back to spending time outdoors and letting loose at the Frühlingsfests (literally, Spring Festivals), a sort of off-season Oktoberfest.

But above all, they look forward to the reopening of one of the quintessential symbols of German brewing tradition: the Biergartens.

WHEN A PROHIBITION BECOMES THE MOTHER OF INVENTION

It all began with the elusive (and almost always misquoted) Reinheitsgebot, or “Purity Law”, passed by William IV of Wittelsbach, Duke of Bavaria, who, in 1516, in Ingolstadt, tired of dealing with the numerous fires that ravaged the city during the summer, ratified (among other things) a ban on brewing between St. George’s Day (April 23) and Michaelmas (September 29).

At the time brewing was done over an open flame in wooden buildings; a bit like driving without headlights at night, a very risky endeavor. To avoid going bankrupt, breweries began producing and accumulating beer in March (the famous Märzen).

But how did they preserve it in a world without refrigeration, and ferry it to autumn without it spoiling?  The Bavarians ingeniously began digging Kellers (cellars) next to their breweries, along the entire length of the Isar river. Then, to help maintain these lower underground temperatures, they covered the banks of the river in gravel and planted a forest of horse chestnut trees to guarantee, with the help of the thick foliage and broad leaves, a suitably shady covering. Once the trees had grown (approximately 30 cm/year), it wasn’t long before they set up these spaces with tables and benches and began serving cool and thirst-quenching beer, drawn directly from the underground Lagers (storage areas).  The shade of the horse chestnut trees, the fresh breeze off the Isar river, and the view of the water flowing serenely by become an irresistible attraction in the summer for the Müncheners, and soon the “Beer Gardens” started becoming more and more popular.

So much so that the breweries and pubs of Munich’s historic center, due to a lack of clients during the spring and summer months, began complaining to and petitioning the King of Bavaria to do something. In response, his Majesty Maximillian Joseph I, passed the Bayerische Biergartenverordnung (an ordinance regarding the Bavarian Biergartens), which prohibited serving food or beverages other than beer in these gardens (only bread and pretzels were allowed as people had to be able to “dry out”) and allowed patrons to bring their own food from home. It’s been a long time since 1812 and the Biergartens are now an accepted establishment, becoming not only a symbol of Munich and Bavaria, but of the German culture as a whole, including Austria and Tyrol, where they acquired the name Gastgarten (guest garden). So this April, thanks to Easter coming so late in the season and the geographical proximity to Italy, what better occasion is there for a long weekend away?

Here are the six best destinations for Christmas at home and Easter at a Biergarten! 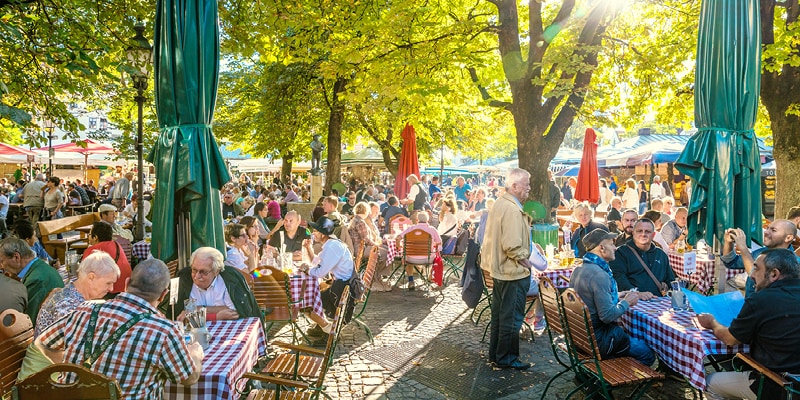 Built in 1789 within the Englischer Garten (English Garden), previously the Wittelsbach hunting grounds and today the city of Munich’s green lung, with 373 hectares making it one of the biggest city parks in the world (alongside Central Park and Hyde Park), the Chinese Tower is a mandatory stop for anyone who wants to experience the true atmosphere of a conservative Biergarten.

Emulating the design of a Chinese pagoda located in London’s Kew Gardens and based on the architectural principles of the time, it’s a bastion of brewing tradition. Here you can enjoy an HB while the traditional brass bands (the only ones that can go up the tower) play “Ein Prosit der Gemütlichkeit” in the background, or ride the wooden horses of the Bedermeier original vintage carousel.

Furthermore, as a true traditional Biergarten, it continues to offer the option of only pouring (allowing patrons to bring food from home). The different areas are easily identified thanks to tables with or without tablecloths.

780 seats doesn’t seem like much compared to the giants of Munich, but who says size always matters?

Here in Freising we touch history with our hands… and drink it too! That’s right, because the Weihenstephan (Saint Stephen) is the oldest brewery in the world that’s still in operation! Founded as a monastery in 725, by 768 the monks were already producing beer for their own consumption, and in 1040 obtained a sales license from Emperor Henry III. The Biergarten serves sixteen beers, also thanks to the fact that it’s right next to the brewery (kind of feels like cheating, doesn’t it?).

You simply have to taste at least one of the six Weizen offered.

With seating for 8,000, it’s the biggest Biergarten not only in Munich, but in all of Bavaria.

Established in 1720 as a private ducal property (it was used to breed pheasants, grow hops, and finally for sericulture or silk farming), in 1784 Karl-Theodore II, Duke of Bavaria, transformed it into a private hunting residence before opening, in 1791, the Jägerhaus (literally “house of the hunter”, the current Biergarten structure) to tourists and residents who were free to enjoy a cool mug of beer, accompanied by something to eat, in the shade of the trees.

The truly unique feature of this Biergarten is the opportunity to sip a beer (König Ludwig, Augustiner, or HB) while observing red deer (more than one hundred), which roam freely in the 40 hectares of the reserve and have been there since it was the duke’s hunting residence, hence the name Königlicher Hirschgarten or “royal garden of the deer”.

A small Biergarten with only 150 seats, located in one of the undisputed world capitals of brewing. We present to you the Fässlakeller.

The historic Fässla  brewery (“keg” in the local dialect) was established in 1649, and today serves six different beers in its garden, all rigorously in the Czech-German style, as well as traditional Franconian culinary specialties, like grilled mackerel and crayfish.

We couldn’t leave the oldest Biergarten of the oldest brewery in Munich off our list.

We’re talking about the Augustiner Keller. Opened in 1812 by the Büchl brewery (no longer in existence) and rediscovered in 1862 by the Augustiner  (1328 AD), once the renovations that the new property required were finished (bringing the seating capacity to 5,000) it opened back up to the public in 1896 and has remained the same, without touching even a nail, up to the present day. A true piece of brewing archeology!

The house specialty? Edelstoff Beer (the special Augustiner Hell) served directly from the wooden keg using a Zwicklhahn, the traditional tap of the master brewer.

The original Prater is obviously found in Vienna, but its Berliner version is just as lively and crowded.

Don’t be fooled by the graphics of the Santa Muerte style insignias or by the industrial atmosphere; the Pratergarden, first opened in 1837, is the oldest beer garden in Berlin. There’s no table service; you must wait in line and choose from one of the four house beers offered (all rigorously served on tap from wooden kegs), and then hunt down a free place to sit from among the 600 seats available.

This Biergarten, also known for the very low prices of its mugs (starting at just €3.50 each), also has an outdoor stage where the Volksbüne (people’s stage), one of the most innovative theatre companies in Berlin, performs.

If you want to have a true experience in a real Biergarten, the key word is Maβ! The Maβ (pronounced “mass”) is the only unit of measure (1.069 l) in which to order, draft, or serve a beer. Period. Leave your “small” and “medium” at the door please.

Every time a new barrel or keg are opened a bell is rung, the same which, at closing time, indicates the last call. Stay tuned. In Biergartens (I know this is strange for many) there’s no such thing as “your” table, only large tables which will sooner or later fill up all around you with other people, who will start talking. You’re not in a tea room and you’re not in Seven Years in Tibet.

Turn off your smartphone and, with the help of the miraculous alcoholic power of the Maβ (see above), break the ice and start socializing! You’ll end up (happily) singing arm in arm.