THE WOMEN OF BEER PRODUCTION

When we say “beer”, our collective imagination fills with big-bellied and bearded men, mugs of beer slammed down onto the counters of dive bars in Caracas, cowboys wearing Stetsons and Hells Angels with their camperos boots and patches, and all of the stereotypical machismo that you can find in Cliff Notes or in the sports bar down the street.

In short, tough masculine stuff (without neglecting to mention, among its spokesmen, the eternal Arnold Schwarzenegger and, above all, Homer Simpson…), in which women are relegated to a background made up of pin-up images.

Nothing could be further from the truth.

Beer is also feminine, and if we now have the good fortune of being able to open the refrigerator, or go to a pub, and enjoy a thirst-quenching pale ale, well… we owe a big thank you (much bigger than you can imagine) to women.

This March 8th, to celebrate International Women’s Day in our own unique way, we present to you the eight women who revolutionized the world of beer.

In 1734, In Philadelphia, USA, in a world that was as industrialized as it was chauvinist, Mary Lisle, against all odds, took over leadership of the Edinburgh Brewhouse, becoming the first female master brewer of the modern age.

Over the past three centuries other heroines of the tankard have stepped forward into the brewing world, in which now more than 35% of the sector’s operators are women, refuting the senseless chauvinist prerogative once and for all.

First place in Italy goes to Rosa Gravina, of Orzo Bruno in Pisa.

Master brewer since 1995 (the dawning of beer in Italy), trained in the Lambrate neighborhood in Milan, she opened her own artisan brewery in 2003 and is one of the absolute founders of the Italian craft beer movement.

Best remembered for her venomous snakes, immortalized by Shakespeare and Elizabeth Taylor, and the sixth queen of the Ptolemaic kingdom of Egypt, Cleopatra was also one of the primary individuals responsible for introducing beer in Italy.

A skilled orchestrator of diplomacy and a femme fatale, the Queen of Queens, having bewitched first Caesar and then Antony, promoted the exportation of Zythum and Curmy (the primary Egyptian beers) to wine-drinking Rome (her habit of bathing in beer in order to make her skin soft and smooth also complicit). 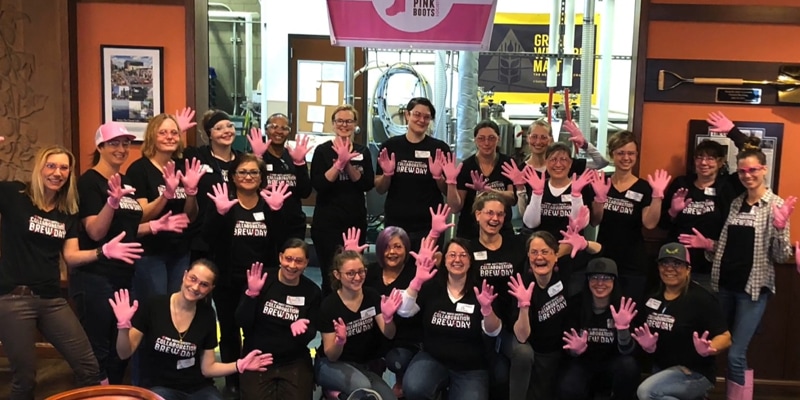 Born in Wisconsin to a family of German origin, she was the master brewer of River North, Golden Gate, Triple Rock, and Steelhead for about ten years.

In 2007 she travelled across the United States, Oregon-Maine A/R, 20,368 km, armed with her characteristic pink rubber boots, to meet, at their respective breweries, the top 70 women operating in the brewing industry in the United States. The following year she founded the Pink Boots Society, the first organization in the world that supports, through training and mentoring, women who are working or want to work in the beer industry.

In 2011 she also created Barley’s Angels, an organization for non-professional beer lovers. Thanks to the now universal consumption of and interest in beer (more than 70% of women appreciate beer), projects that follow her example have since been established all around the world, including Le Donne della Birra [The Women of Beer], in Italy.

The first woman to hold the title of Master Brewer in a Trappist brewery, perhaps the most iconic of them all.

The only woman to have ever worked in this monastery, after 21 years of hard work, and a weighty legacy left by Jean-Marie Rock (the brilliant and celebrated, yet caustic, master brewer who retired after thirty years of brewing), she has now successfully held the reigns of the brewery since 2013. The Val d’Or is now a little more feminine.

Originally Doris Engelhard, born in 1949 in Bavaria (it goes without saying), a nun of the Poor Franciscan Sisters of the Holy Family, she represents the feminine counterbalance of the Trappist or Abbey Beers that we’re all familiar with.

In Europe’s centuries-old monastic tradition, beer was by no means the exclusive domain of the brothers. Numerous sisters (just think of the Reutberger brewery, also in Bavaria and also run by the Franciscan Sisters) brewed beer as well.

Sister Doris is only the last in a long line. For the past 53 Springs, despite being 73 years old, every morning at 3:30am (excused from the morning functions by the prioress) she leaves behind her role as nun and transforms into a master braumeister, significantly contributing to the sustenance of her 490 sisters at the Mallersdorf monastery.

A niche production of just 800 hl/year, exclusively seasonal (Maibock, Doppelbock, Zoigl, and Lager on a rotating basis) and raw. There’s no online store and no shipping, you can only find it in the pubs of the Straubing-Bogen district, Lower Bavaria (or at the convent’s shop). It’s worth a visit.

Sister Doris is also responsible for having introduced brewing to other religious female communities, which have returned to ancient productions, like her Benedictine peers/rivals of Maredret (with their beer by the same name), in Anhee, Belgium.

Big, broad, brawny, male, halfway between Hephaestus and Fulliautomatix (the blacksmith of the Gallic village in Asterix): this is the stereotype of the Master Brewer. Wrong. This ancient profession (probably the second oldest profession in history… or the first lawful one), throughout antiquity, was the work of real…women!

The trousseau of every good Sumerian-Assyrian-Babylonian (as well as Incan or Viking) bride always included the necessary accoutrements for producing beer. The peak of this feminine monopoly was reached between the 14th and 18th centuries, when more than 80% of European beer production was firmly in the hands of women, the so-called “Alewives”.

They’re the ones who, passing it down from mother to daughter, preserved the ancient European herbalist tradition; the ones who invented the insignias and flags (when the beer was ready to be sold, not having anything else, they would hang a broom outside of the house), which became typical of taverns and breweries; the ones who invented our beloved pubs and the figure of the publican.

Our Mistress Brewers opened their homes to those who simply wanted to drink a tankard or purchase a bottle, turning it into a pub(lic homes), or a house that was open to the public.

We don’t have a name or a face, but we know with absolute certainty that it was a woman.

The putative mother of our beloved beer, a skirt-wearing Christopher Columbus sailing on amber waves, the human being who changed the course of beverage history, was a woman. 10,000 BC, Mesopotamia (a nomadic society of hunters = men, gatherers = woman), the Eve of all brewers forgets her urn of freshly gathered wild grains (wheat, barley, or spelt).

Rain and the heat of the sun, alternating in those moors, do the rest of the magic: beer was born. 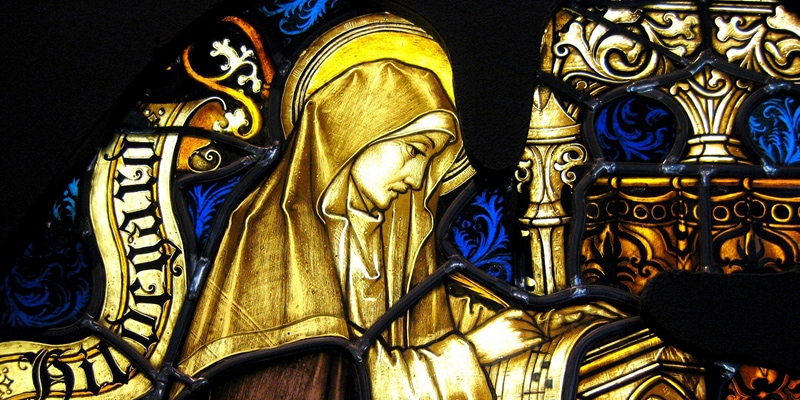 One of the great minds of the late Middle Ages, as eclectic as it was (undeservedly) unknown.

And in her free time a nun, abbess, exorcist, and saint.

She should be mentioned in history books, on equal footing as her masculine counterparts, like Leonardo and Dante.

Born in 1098 in a small town in Rhineland, Germany, she became a Benedictine nun in 1112, wrote 13 books on various topics, painted illuminated manuscripts, composed Gregorian chants, and created the Lingua Ignota [Unknown Language], an artificial language with its own 23-letter alphabet, long before Zamenhof’s Esperanto or Tolkien’s languages of Middle Earth.

She openly challenged, with harsh words (and without being beheaded), Emperor Frederick Barbarossa, for having opposed two antipopes to Pope Alexander III and was the first woman in history to describe, without regard for the clergy or for Rome, the female orgasm! In a word: revolutionary!

Today, when we talk about beer, we mean water, malt, yeast, and hops, but prior to the studies of Ildegarda, hops wasn’t an ingredient. They used to dump everything (truly everything! From raspberries to myrtle and the famous Gruit) into the cervogia, except for this flowering plant.

In her “Book of Creatures” she is the first to talk about hops which “thanks to its bitterness, halts the putrefaction of certain beverages to which it is added, allowing them to be preserved for much longer”. Beer (complicit also Martin Luther and the Protestant Reformation) would never be the same.

And if today we can enjoy a thirst-quenching, bitter, and aromatic beer, well, we undeniably have her to thank.

Let’s raise our mugs in a toast and salute to all of the women, past, present, and future, whose passion and dedication have and will improve the world… or at least our pints!