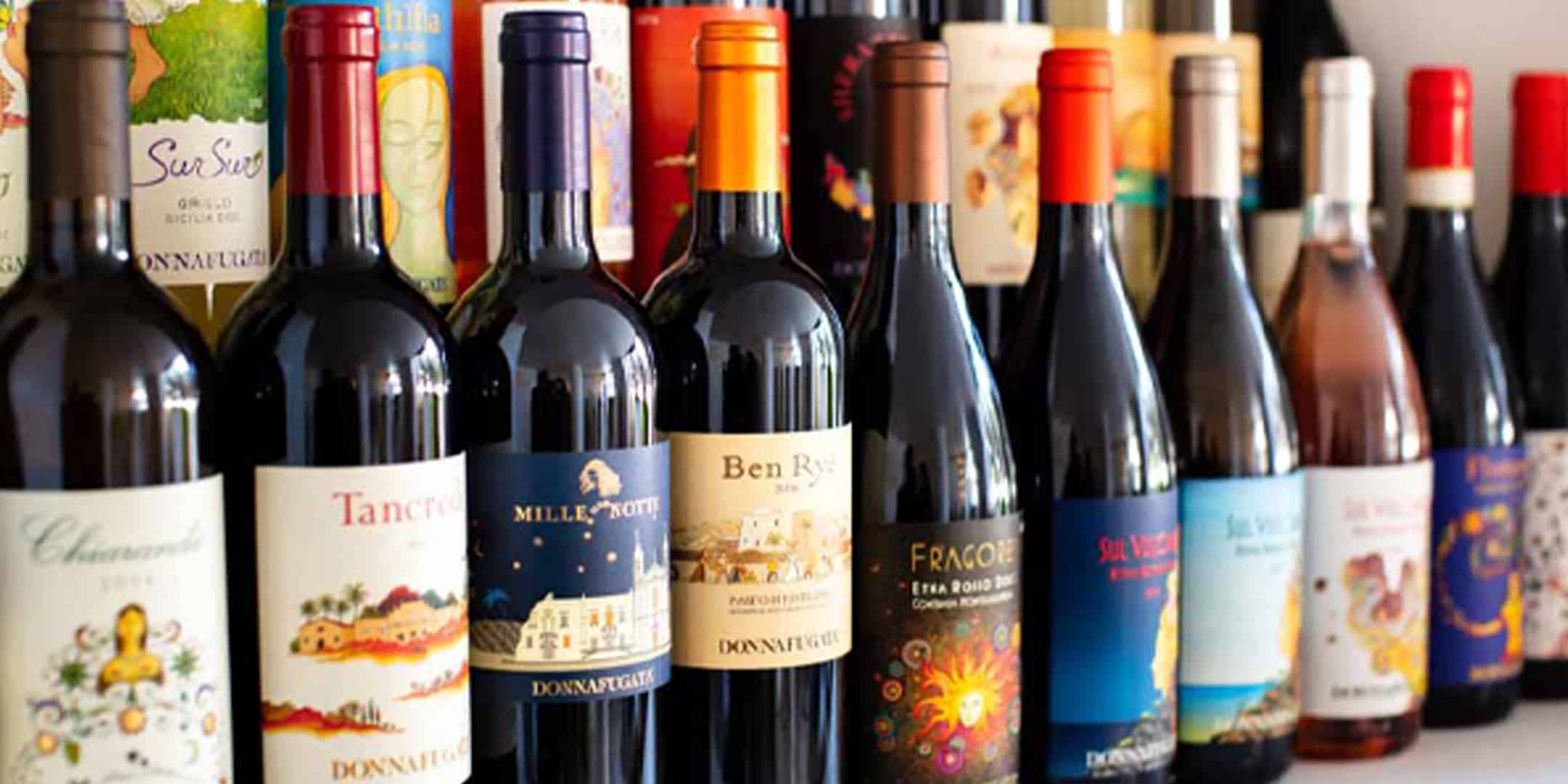 One of the first things we look at when we see a bottle of wine is the label. It’s a winemaker’s calling card, the part that first catches our eye, and which is able to communicate the product’s essence, in the same way as tasting notes. Often, it is the deciding factor influencing our choice. The label is essentially a livery, dressing the bottle and making a personal statement. And so, several wine estates have decided to make it their signature song. Not just graphics but the label ennobled, becoming auteur labels designed by artists. Collectors’ items which evoke emotions and tell stories. A perfect prelude to pleasurable tasting.

In this article, we have selected four artist labels that have made four winemakers famous and instantly recognizable.

When talking about artist labels, Donnafugata is one of the first names that springs to mind; the wine estate that has used art to create a distinctive element. The artistic labels designed by Stefano Vitale dress and color the bottle of this well-known Sicilian brand, making it instantly recognizable. Minature, colorful works of art that reveal the wine and Sicily using a fairytale-like and feminine language.

It started back in 1994, thanks to a fortuitous meeting with artist Gabriella Anca Rallo who, together with her husband Giacomo, had established the Donnafugata wine estate. “Gabriella was a guest at one of my neighbors – Vitale recounts – she went into my atelier and saw my drawings; we had just met and suddenly she said “Would you do a label for me? Why don’t you give it a go?”. And that was the start of an alliance that’s still going strong today.

The labels feature Sicilian female figures, including the Siren Lighea and the proprietor of the wine estate, Gabriella Ronco, courageous women that have left their mark, but you will also find other figures taking inspiration from the Arab world.

The style is naïf and the colors are typically Sicilian. In 2018, Stefano Vitale’s labels were featured on show in Milan at Villa Necchi Campiglio, at the exhibition “Following Donna Fugata” recounting the story behind the wine that has become famous around the world due not only to its quality but also for its labels.

Two new labels have been added to the collection created by Stefano Vitale, originating from the collaboration between Donnafugata and Dolce&Gabbana, united by their shared, unconditional love of Sicily and devotion to detail and craftmanship. 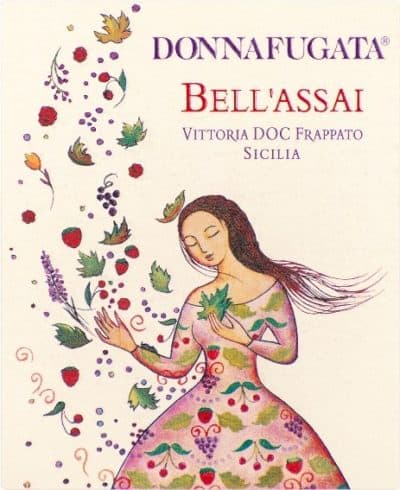 Way back in 1974, Vietti was already dressing its wines with original labels, each one specially created by a different artist and inspired by the wine of that particular year.

The first hundred bottles are also signed by the Artist.

Each original work is used once only for the wine from that vintage. “The idea originated around a bottle of Barolo Rocche”- Alfredo Currado reveals – “One winter evening, in the company of a group of friends, some of which were artists, enjoying a few bottles of Barolo; just seeing the color of the wine in the glass was thrilling and they said that such wines should be ennobled sporting a livery that stood out from the crowd: i.e. they deserved Artists’ labels. In the euphoria of the moment, we compiled a list of Artists and the next day, that vague idea took shape”.

Since 1974 to date, there have been twenty artists involved in the undertaking. One of such names to stand out is that of Pier Paolo Pasolini.

The story behind the design is both curious and sorry at the same time. The artist agreed to create a label for the winemaker, given the long-standing ties of friendship. However, he was unable to respect the undertaking due to his premature death. So, his niece donated a work that he had completed in his youth to the winemaker, the drawing called “Tunin”, created at Casarsa in Friuli in 1941. It was matched with the Nebbioli d’Alba.

Amongst the labels, we will find those designed by Robert Cottingham, Oliviero Toscani and Renzo Piano. This year the label has been created by Alessandro Piangiamore for the Barolo 2013 Riserva Villero. 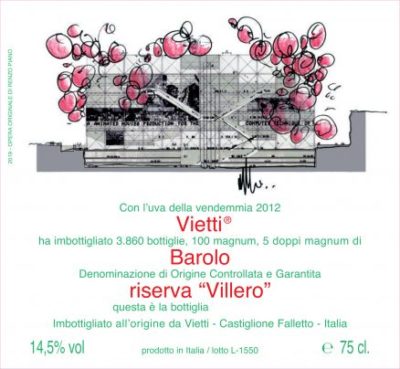 This time we are crossing the Alps to stop in France. Here, we find one of the most successful and lasting examples of the love affair between art and wine. Of course, we’re talking about the Château Mouton Rothschild wine estate, which, since way back in 1924 has been celebrating wine through art.

Great artists were asked to design labels, like Bacon, Mirò, Chagall, Dalì, Picasso and Andy Wharol, who all contributed to creating the myth of the most famous Bordeaux in the world. The labels are inspired by the vines, the wine or especially important or significant historical episodes.

The first artist label dates back to 1924 and it was commissioned to Jean Carlu. The second was created in 1945, at the end of WWII by Philippe Julian and it celebrated the liberation. In fact, the label features a symbolic “V” for victory image. Since that time, many other artist labels have followed suit leading to today. 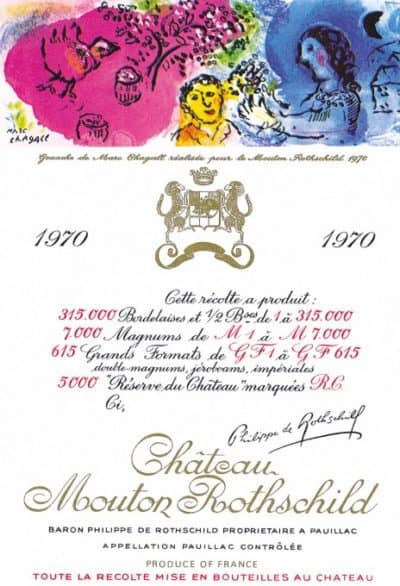 Also, at the Cantina Produttori di Cormòns, art and wine have been blended in a fortunate and original fusion. Since 1985, the winemaker has been producing the Vino della Pace (Wine of Peace) so-called because the vines come from various places around the world. Since then, each year, three international artists are invited to design the labels for the bottles.

The first were Zoran Music, Arnaldo Pomodoro and Enrico Baj. Since then, they have been followed by other artists like Dietman, Minguzzi, Fiume, Consagra, Celiberti, Manzù, Sassu, Fini, Vedova, Anderle, Rauschenberg, Corneille, Treccani, Nagasawa, Tadini, Ceroli and also Dario Fo and Yoko Ono.

Today, Cantina Produttori di Cormons has become an out-and-out art gallery. But not just the labels; the love of art has led the Cantina, since 1983, to also paint the wine barrels. For this undertaking, major Friulian artists have been called on.

And, as is the case of any work of art worthy of such name, due to wear and tear, in 2018 any damaged wine barrels were restored. This love of art over time has become one of the distinctive features of Cantina Produttori di Cormòns. 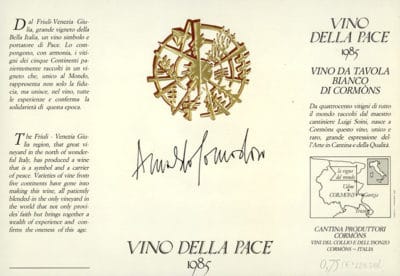 And what other artist designed labels do you know? Leave us your answers in the comments section.