A TRIP THROUGH CALABRIA WITH BARONE MACRÌ: INTERESTING FACTS, HISTORY, TYPICAL DISHES AND GRAPE VARIETIES FOR YOU TO DISCOVER This will be the year when Italians have an overwhelmingly healthy desire to rediscover their country, but Calabria is increasingly becoming one of their chosen holiday destinations like never before.

And how can you blame them?

You simply have to come to discover this region, its wines from native varieties and its typical dishes.

Leading us on this journey to explore the tastes of Calabria is a noteworthy guide: the Barone Macrì farmhouse.

It is not just a winery nestled in the province of Reggio Calabria, but rather a little corner of paradise on the Ionian Sea, where they make cheeses, oil, honey and bergamot on over 500 fully organic hectares of land.

In fact, you should know that Calabria is the region with the highest number of organic vineyards in Italy and the third region in the EU for organic farmland!

SIGNS OF THE HISTORY OF WINE-GROWING IN CALABRIA

The history of wine and vines in Calabria has deep roots in the ancient past, the Magna Grecia coastal areas, when Greek colonists moved from their homeland to settle along the Italian coastline and brought vines with them, a gift from Dionysus, and their noble fruits.

Gaglioppo, one of the most iconic varieties of Calabrian wine-growing, dates back to the 8th century BC and was imported by the Greeks along the Ionian coastline.

This area was so famous at the time that it was called Enotria, the land of wine.

But that is not all, the wines they made in this region were so fine that they were used as the official drink during the Athens Olympics. It was a sort of ancient example of sponsorship in sports.

Yet neither ancient origins nor a thriving wine market, which was heavily promoted by the ancient Greeks, could keep interested up for wine and wine-making, so over time, many native grape varieties were lost.

Luckily, they are now making a glorious comeback.

There are so many native Calabrian grape varieties and many of them have very special names, which really entice you to try them.

We will mention the most used ones and which #Characters to expect from the wines we recommend you try, particularly if you are on holiday in the area. 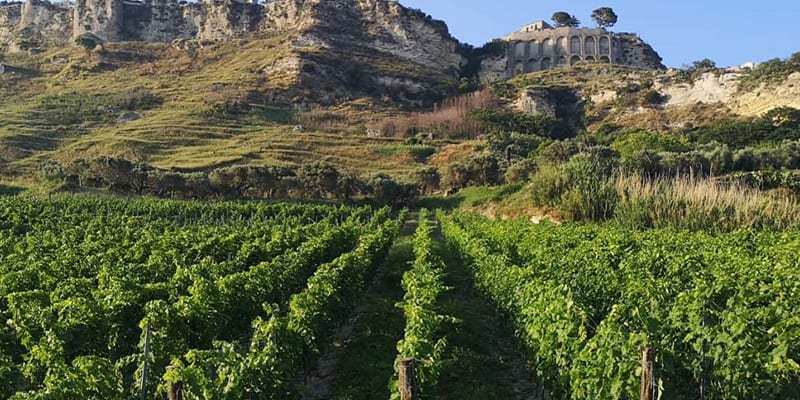 Mantonico (#Charming, #Profound): this variety was seemingly being grown in Calabria as far back as the Greek colonization in the 7th century BC. Its name most likely comes from the Greek “Mantonikos”, a wine that seems to have been used by the priests of ancient Locri Epizefiri and by soothsayers.

Greco Bianco (#Charming): the name makes you think of its undoubtedly Greek origin, but in any case, it is one of the most used grape varieties for Calabrian whites and is found in many DOC wines, including Cirò.

Guardavalle (#Charming): this native Calabrian variety is particularly widespread on the Ionian side.

Pecorello (#Outgoing, #Charming): this native Calabrian variety is particularly widespread on the Ionian side but not to be confused with Pecorino, a variety from central Italy.

Magliocco Canino (#Sensual): this variety belongs to the huge family of Magliocco grapes typical of Calabrian wine-growing, where it stands out with its enormous wine-making potential. The origin behind its name is unknown but perhaps comes from the fact that the bunches of grapes are small as a fist or mallet.

Gaglioppo (from #Sage wines): this native Calabrian red grape variety is probably Greek in origin and primarily found in the region’s coastal areas. Gaglioppo is the most common variety in Calabria and we find it in all the region’s DOC red wines, in particular, red Cirò.

Castiglione (#Magnetic): this exclusively native Calabrian variety is found in the provinces of Cosenza and Reggio Calabria. It is also known as Zucchero e Cannella or Zagarolese. It is mainly grown in the south of Calabria on the coastal hillside.

Greco Nero (#Sensual): this variety is a key part of Calabrian tradition and has always been grown in this region, particularly in the provinces of Catanzaro and Crotone. In the DOC Bivongi area, its name in dialect is Magliaccione or Greco Niuru. It is normally blended.

Nerello (#Magnetic): Primarily grown in the region called “Locride”, this variety has many names (for example, Carbonaru, Paesano and Nostrale). In some areas of Calabria, the name Nerello is also used for Sangiovese.

Marsigliana Nera (#Laidback): This variety is found in the provinces of Catanzaro and Cosenza, particularly on the Tyrrhenian side, around the municipalities of Lamezia Terme, Pianopoli and San Pietro a Maida. A high percentage of it is used in PDO Lamezia.

Following a chat with the Barone Macrì farmhouse on Facebook live in May, we got the chance to try many of their wines, which really give you a great taste for Calabria given that they only use native grape varieties. We will tell you about them and add a little recommendation for food pairings. 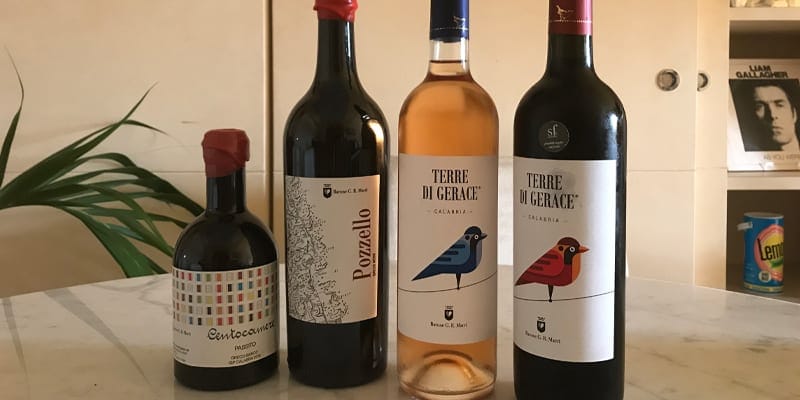 Made from sheer experimentation, this rosé based on the Nerello Mascalese grape won well-deserved awards with its 2018 vintage at the Radici del Sud event.

A sparkling wine with a #Brilliant character, featuring a prevailing lively acidity and a dry taste which is sure to reinvigorate you.

We recommend it with fried foods and you are spoilt for choice here in Calabria. For example, try it with whitebait fritters.

This blend of 60% Greco Bianco and 40% Inzolia has an astounding #Outgoing character. It has a strikingly fresh, citrusy flavor which you do not expect from a southern white. We recommend it with a good plate of Pasta ca’ muddica, a first course made with breadcrumbs, anchovies, and pecorino cheese!

Made from a blend of Nerello Mascalese and Greco Nero, this #Magnetic red comes from two native thoroughbreds.

Fresh and low in tannins, you will never get tired of this red thanks to its good acidity and flavor of ripe red berries.

We recommend trying it with pipi chini or melangiani chini (peppers or eggplants stuffed with cheese and dry bread served in tomato sauce).

Or be brave and serve it a few degrees cooler, as is the trend right now, and try it with Stocco alla Mammolese, a Calabrian version of stockfish, which is enjoyed all around the world.

A pure Nerello rosé with an #Eccentric character. Fresh and with a tangy salinity, it goes well with apéritifs or throughout the entire meal. A truly versatile wine which we think goes really well with fish soup sprinkled with a few tomatoes or with a platter of traditional sliced and cured meats.

Made from Greco Nero refined in barrique casks, this Pozzello is definitely the company’s flagship wine. With its #Sensual character, it is a well-structured, mellow red suitable for rich Calabrian dishes. We recommend it with some fresh local pasta, maccheroni with goat sauce, or with a simple tomato sauce enriched with ’nduja. The natural sweetness of the wine and the silky tannins will help your taste buds to recover.

Wow, what a straw wine! Unlike normal southern Italian straw wines, Barone Macrì’s Centocamere is perfect for people who like wines that are not too sweet.

Raisined straight in the crates where the grapes are picked by hand, they are not left to dry in the sun, so they do not lose the characteristic aromas that otherwise would have oxidized away.

Mellow and sweet but not sickly, it is strikingly balanced on the palate, which makes it drinkable despite its 14% alcohol volume (it might even be more!). The food pairing is obvious: try it with a bergamot jam, the typical highly fragrant Calabrian citrus fruit, either in a tart or with aged, flavorful cheese. 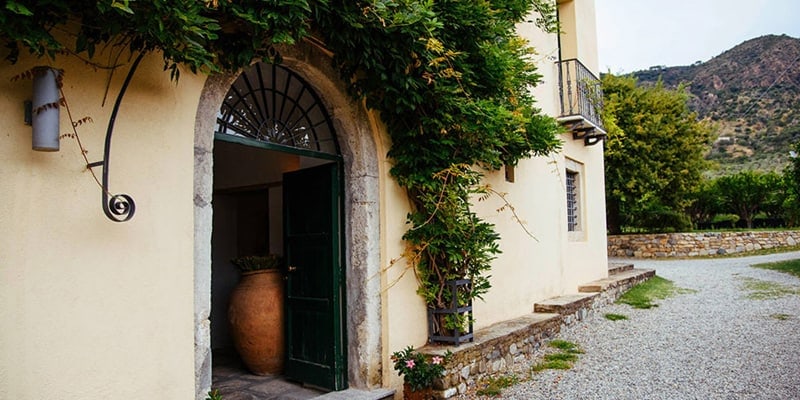 If you are undecided at the last minute and have not yet planned your holidays, then Calabria is a destination you should seriously consider!

If you are looking for something different where you can fully immerse yourself in the peace and quiet of nature, Barone Macrì will also be delighted to welcome you at its farmhouse, where you will find great accommodation and a traditional restaurant, as well as many activities such as cooking classes and a teaching farm.