Who hasn’t ever heard of Trappist beer?

If you’ve raised your hand (for shame) run out and buy one immediately and put an end to your sin! Trappist Ales are a fundamental cornerstone of Belgian brewing tradition, and therefore of the world’s brewing tradition in general.

But what exactly are they?

They are, simply put, beers produced by the Order of Cenobitic monks (“Ora et Labora” of Benedictine memory, to be clear) of the Cistercians of the Strict Observance (aka the Reformed Cistercians), and must slavishly adhere to three extremely strict rules. The beer must be produced in or in the vicinity of a Trappist Abbey, it must be brewed by the monks, or regardless under their supervision, and the profits must be used for supporting the monastery and its community, or they must be donated to charity.

No ifs ands or buts!

THE BIRTH OF AN ORDER…AND OF TWO STYLES!

Founded, complete with papal address, in 1677, at the Abbey of Notre-Dame de la Trappe in Soligny-la-Trappe, Lower Normandy, France (from which they borrowed the name), despite popular opinion, the Trappists began brewing beer much later.

Contrary to other religious orders, for almost their entire existence they abhorred the consumption (never mind the production!) of this pale (and sinful) beverage, until the fateful year of 1836 when, out of necessity, they brewed their first beer in one of their convents in the province of Antwerp, Flanders.

That marked the point of no return, with the binomials “Trappist-beer” and “Trappist-Belgian Ale” being solidly sculpted into the collective conscious.

Within these walls, styles that represent the backbone of Belgian brewing were created and developed, like Enkel, (but above all) Dubbel and Tripel, the styles traditionally produced by the monks. 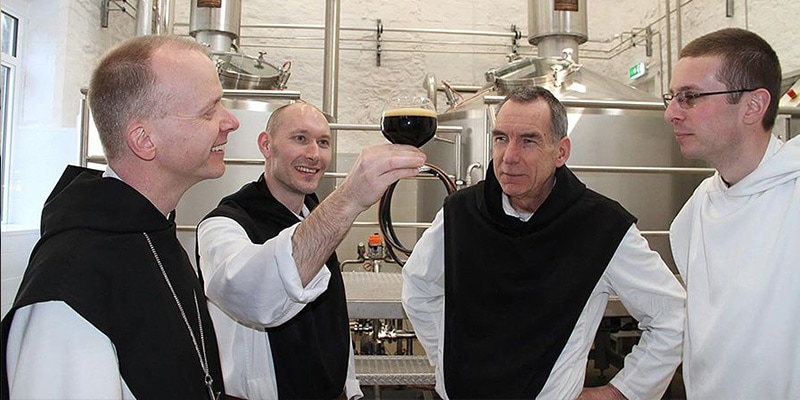 The success, first in Belgium and then worldwide, was such that it pushed other producers to climb aboard the winner’s cart, producing beer branded with the popular (and commercially hyped) epithet of “Trappist”.

The issue came to the attention of the court of Ghent, Flanders, which, in February 1962 established the Reformed Cistercian Monks’ exclusive right to use and take advantage of the term “Trappist Beer”, granting them legal protection.

The flaming 70s and 80s took the world of beer by storm, with Michael Jackson and the American Renaissance, directing the global attention of connoisseurs to these beers once again, and unleashing a new (q.e.d.) wave of fakes.

Until, in 1997, eight Trappist Abbeys (6 in Belgium, 1 in Holland, and 1 in Germany) established the International Trappist Association (the association which unites all beer-producing Trappist monasteries), creating the famous, brown and white, hexagonal “Authentic Trappist Product” logo, which we’ve all seen printed on our beloved bottles, thus certifying their provenance.

Today there are twenty abbeys in the association, of which only thirteen produce beer.

To celebrate 25 years since its foundation, here are 5 essential Trappist experiences that all true beer connoisseurs must add to their to-do list.

1. DRINK A PAIR OF WESTMALLES

The Abbey of Notre-Dame du Sacré-Cœur de Westmalle, province of Antwerp, Flanders, is one of the Trappist brewers. Originally founded in 1794, during construction to enlarge it in 1836 a brewery was added, which began selling to laymen in 1861. It was within these walls that a miracle, actually two miracles, took place. Two of the most well-known and representative Belgian brewing styles were invented by the monks of Westmalle themselves, and these two prototypes established the standards for the styles of today.

In 1926 Dubbel was created, and the (then) “Superbier” was born only five years later, taking the name Tripel in 1934. Two essential beers for any gourmet, and very easy to find, in order to become intimately familiar with these two styles. 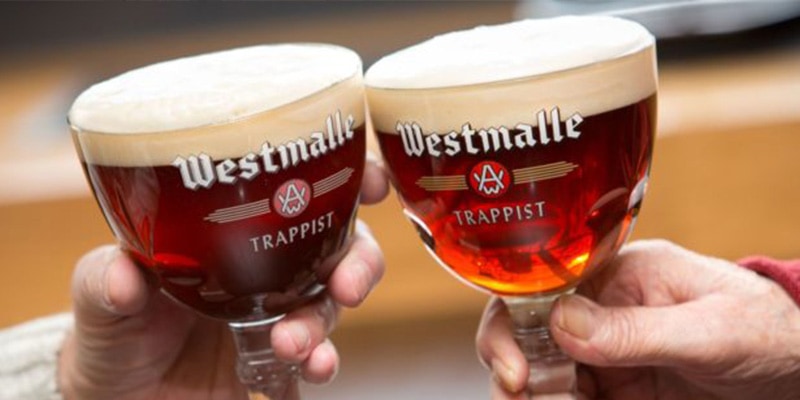 2. THE LEGENDARY ORVAL VERT AND VIEIL OR

We all know the Orval Brewery, of the homonymous abbey, and its (only) beer, in the iconic bowling-pin shaped bottle designed by renowned architect Henry Vaes in 1931.

Not everyone knows that the Orvals, in actuality (drum roll please), are not one, not two, but actually three beers!

So book your flight for Charleroi and, once in Gaume, Vallonia, head to l’Ange Gardien (Guardian Angel), the restaurant with a view of the abbey, where you can taste typical products, including the monks Trappist cheeses, and accompany them with two beers that you can drink only here: Orval Vert, an Enkel with 3.5% ABV that perfectly embodies the pilgrim’s idea of monastic beer (also available in the abbey’s shop), and Vieil Or, the classic Orval, but with a long aging process of at least 3 months in the bottle.

This is truly the golden valley, as Matilde di Canossa supposedly called it (ipse dixit).

3. BUY A CASE OF WESTVLETEREN, OR TWO

The monks of Sint Sixtus, more widely known in the brewing world by the pseudonym Westvleteren, are obstinate and inflexible when it comes to the Trappist movement.

Not by their own volition, they transformed into true rock stars, when, in 2001, the well-known American website Ratebeer.com (as well as BeerAdvocate soon after in 2007) declared their XII (a Quadrupel) the best beer in the world, turning their bottled creation into the White Album of beers.

However, these upstanding heroes haven’t allowed this go to their heads, and their motto remains “we make beer to live, we don’t live to make beer”.

Despite the extreme global demand (in Dubai a bottle of Westvleteren costs the incredible sum of €260), our William Wallaces of beer produce for only 75 days out of the year, for a paltry total of 5,000 hl, unchanged since 1946 (just what they need to support their abbey, not a single cent more), selling directly to private citizens only. They don’t collaborate with retailers, importers, or large-scale distribution, and were the last of the Trappists to hire outside personnel (only 3 employees in addition to 26 working monks).

Are you curious and do you want to purchase a Westvleteren?

Arm yourself with time and patience… quite fitting as we’re talking about monks. And above all forget about simply going to buy it.

You first have to register on the abbey’s website with all of your personal information (including the license plate of your car), then reserve your pick-up at one of the brewery’s available windows, on average after at least 60 days (they receive 85,000 requests per hour). When your time has come, you can go to Sint Sixtus on the set day and at the set time and finally purchase a maximum of 2 cases of beer (for a total of 48 33-cl bottles) to be drunk with a grain of salt.

Before leaving you must promise not to give your private supply to third parties and not to return before two months (remember, they have your license plate and personal information). If all of this is too much for you, stop by In De Vrede (in peace), the Westvleteren’s pub; you won’t be able to buy a case, but they’ll happily serve you an excellent beer.

4. FORGETTING A GRANDE RESERVE IN YOUR CELLAR

TheAbbey of Notre-Dame de Scourmont, in Forges, Vallonia, known to most as Chimay (the brand of its beers), produces one of the rare aged beers. The name of this rarity is Chimay Grande Réserve.

It’s a vintage beer that’s different every year and produced in small quantities. The base is the well-known Chimay Blue, a recipe that’s able to amaze drinkers with its rich and aromatic combination of fruit, chocolate, coffee, and spices. In fact, these beers undergo a second fermentation process in barrels (former rum, bourbon, cognac, or armagnac casks), and finally a third fermentation process in champagne-style bottles.

What’s the result? A surprising richness and complexity. Absolutely not to be drunk (unless dying of thirst in the desert) before it has spent 2 years aging and evolving in your cellar. 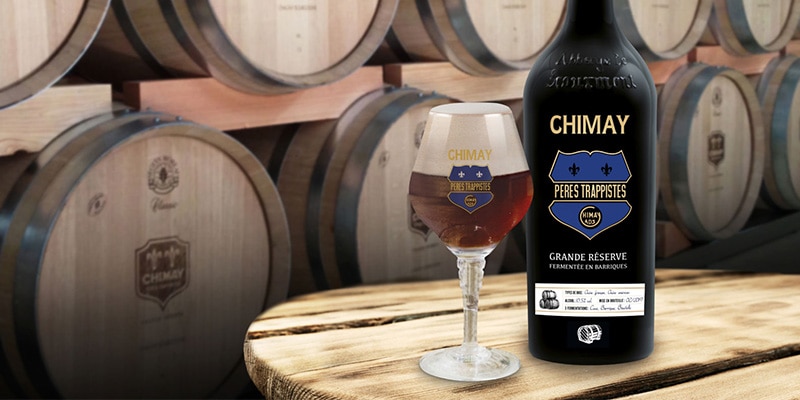 That’s right, even in Italy we have our (pride) dose of Trappist beers. Near EUR, you can find the Fontane Abbey, the only Trappist producer in Italy. Man does not live on beer alone, therefore the Italian monks also dedicate themselves, with outstanding results, to the production of chocolate and liqueurs. The brewery is, obviously, inside the abbey, but even more surprising is finding, in the heart of Rome, an olive grove and a forest of eucalyptus trees, where the monks produce extra virgin olive oil and honey without ever leaving their walls.

The store is open Monday to Saturday, from 8:30am to 7:30pm, so you have no excuse not to do some shopping!

These are the five labors (discounted from 12) which, as next-generation Herculeans, you must surpass in order to call yourself a true Trappist-enthusiast.