Skip to content
CHRISTMAS BEERS: HOW TO RECOGNIZE THEM AND WHY THEY REALLY AREN’T A MARKETING GIMMICK

CHRISTMAS BEERS: HOW TO RECOGNIZE THEM AND WHY THEY REALLY AREN’T A MARKETING GIMMICK 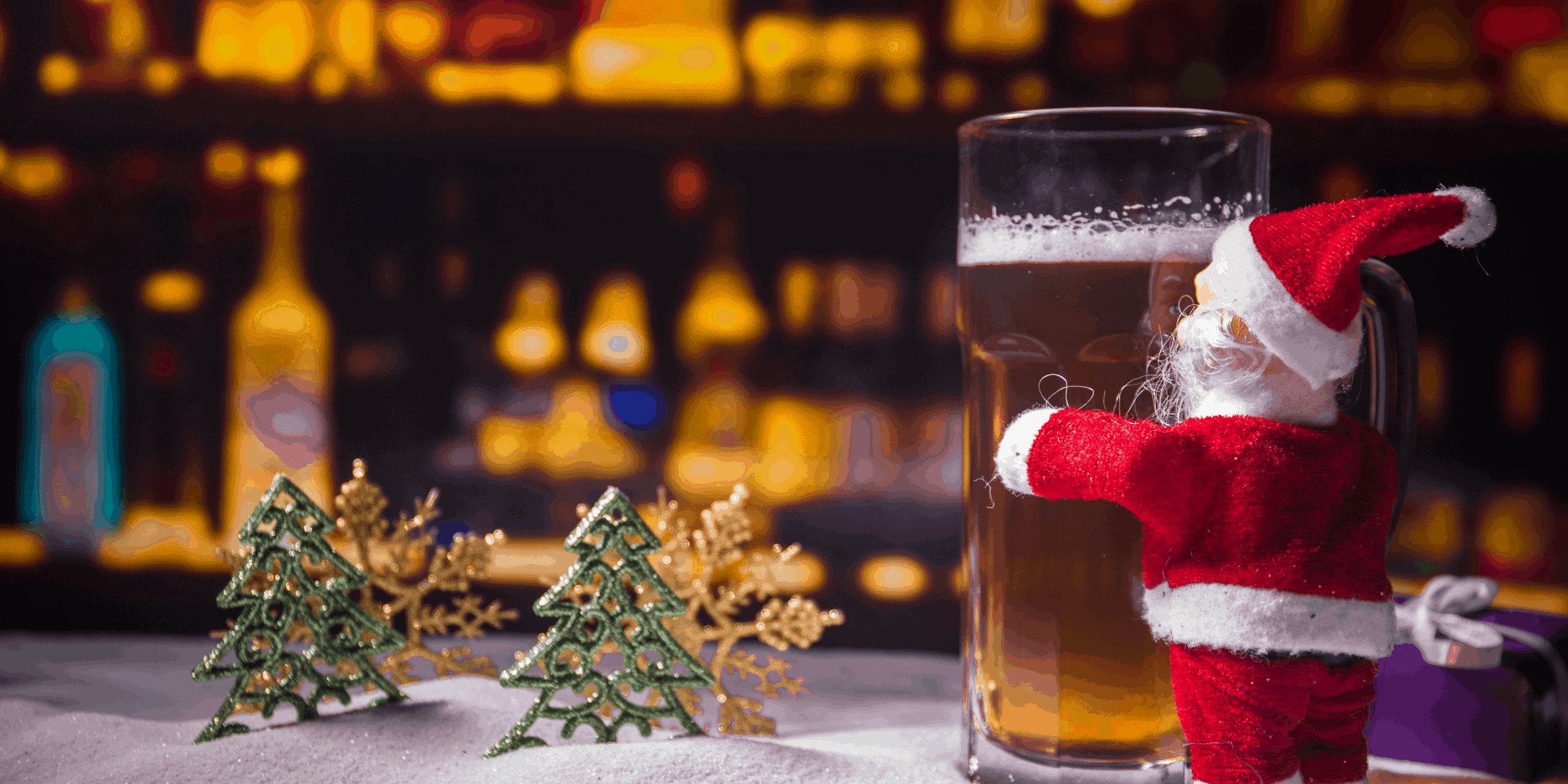 When we see “Christmas Beers”, a montage of sad images immediately flashes through our minds: the tortured faces of shop owners forced to wear humiliating reindeer horns at 50 years old or itchy Santa hats with limp pompoms; basically, an allegory for how they experience “the Christmas spirit”.

In short, we perceive the standard Christmas marketing gimmick.

And yet these beers, which don’t really belong to a specific style, boast an incredibly ancient history which deserves to be told in order to better understand their depth.

Originally from Mid-Northern Europe, they eventually arrived in the United States where they became known as Christmas Beers. Now, each year when the holiday season approaches, we hear more and more talk of these Christmas Beers, even outside the US.

But what are they really?

Christmas Beers are beers that, in general, are particularly intense, complex, and spiced with a rather high alcohol content (6-14%), a sweet flavor, and a color that varies from amber to dark brown with a thick, dense head. In short, they are an explosion of flavor. Catch just a whiff and you might expect to hear Santa HO-HO-HOing behind you. 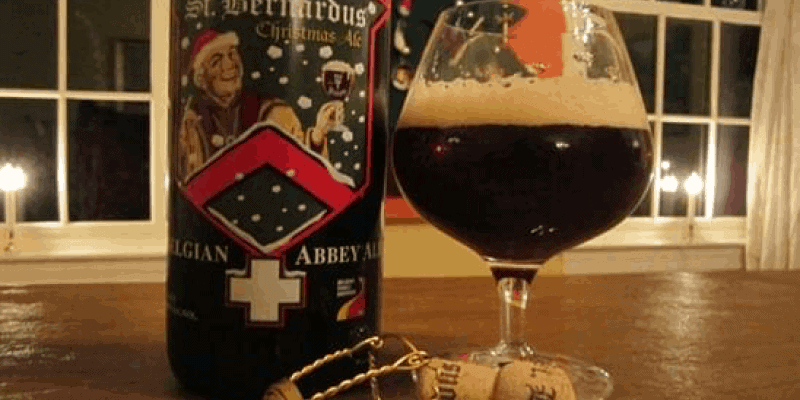 These seasonal beers are considered, for all intents and purposes, Vintage Ales (aged beers or “vintage” in reference to the wine world) in that they are never exactly the same from year to year.

Despite having been recognized as a specific brewing style, with the generic name of Winter Seasonal Beer, there are only a few rules, which aren’t always mandatory and are decidedly vague, allowing master brewers the chance to indulge their creativity often, with daring recipes, thus making their Bière de Noël unique.

How did they come to be?

BEERS WITH AN ANCIENT HISTORY: EVEN THE VIKINGS MADE THEM

Who would have ever thought that beers which call to mind busy little elves in Santa’s workshop actually conceal such masculine origins?

The pagan roots of these beers run so deep that not even the advent of Christmas was able to eradicate them, limiting itself to overlapping with the celebration of the winter solstice.

We have to go back to at least the 5th century AD to find the first ancestors of the current Christmas Beers: the Viking Julebrygs, extremely strong beers produced on occasion of Jul (“Christmas” in Norwegian), a pagan holiday honoring Freya and Odino; the Anglo-Saxon Wassails (from Old English “Ves heil”, literally “be healthy”, “health to you”), a sort of mulled wine made from beer with the addition of roasted apples; and the British Lambswool or Lamb’s Wool (a name which emphasizes their soft and fluffy head), a warm beverage made with beer, spices, and stewed apples.

Drinking these beers is considered a true ritual, not only for wishing oneself the best of health in the coming winter, but also for warming one’s body given the harsh temperatures.

HOW DID THEY MAKE THEIR WAY TO US?

The modern history of these beers, which has continued uninterrupted through to the present day, began in the 19th century, in Belgium, with Kerstbier (in Flemish) or Biére de Noël (in French), terms which, due to the quality of these products, now identify them. The beers were first created in small village breweries, at the time more than 3,000, and were initially prepared for family consumption during the holidays before becoming Christmas cadeaux for employees.

This circle eventually expanded to include gifts for friends, then products for purchase by the residents of the village, and finally, at the start of the 1970s, Christmas gifts for favorite customers.

After this, in the 1980s, they experienced a real boom, with Kesrtbier becoming known and highly regarded all around the world, even influencing local beer production in northern France and Holland.

The most representative example is that of Avec Les Bons Voeux (in Walloon “with best wishes”) from the Dupont di Tourpes brewery, a beer conceived and created as a gift (thus its name) for the most loyal clients during Christmas 1970. The success and the demand were so great that the brewery was forced to market it regularly since then, every Christmas, to this day.

Among the many dozens of Belgian beers that exist, we cannot neglect to mention Stille Nacht from the De Dolle Brouwers (in Flemish “The Crazy Brewers”) in Essen, in western Flanders (the city in which the Kerst Bier Festival, the international Christmas Beer festival takes place). It is perhaps the most famous and popular of the Winter Seasonal Beers, for which there is enormous anticipation and high expectation each year among connoisseurs from all around the world. 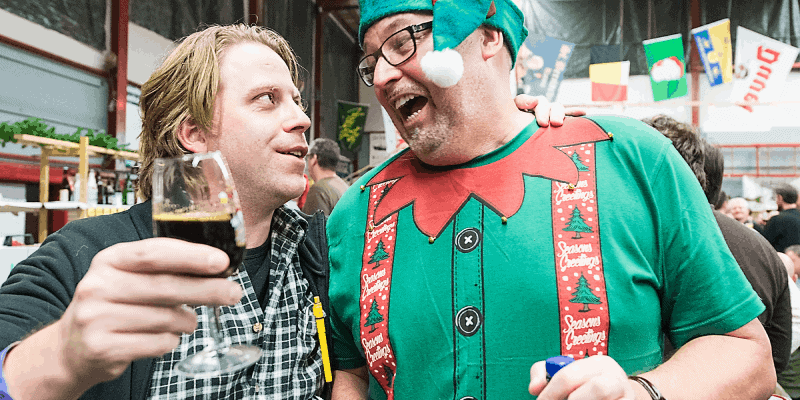 These beers, now as in the Middle Ages, are produced in the summer and sold, after a long aging process, only at the start of the advent, in conjunction with the Christmas markets which are extremely common throughout central-northern Europe.

In Great Britain, on the other hand, there are the Winter Warmers or Winter Ales, the great-grandchildren of the Anglo-Saxon beverages (the fact that there’s no mention of the Christian Christmas is no coincidence…), known for their body and alcohol content.

Could Italy be missing from this landscape so full of imagination, creativity, and talent?

Together with nearby Switzerland and with the United States, we are one of the countries (outside of the historic macro families of Belgium, Germany, and the United Kingdom) that has most successfully interpreted, invented, and produced Christmas Beers, since 2004 when, in Piozzo (CN), the legendary master brewer Teo Musso of the Baladin brewery produced his Nöel, the first Italian Christmas Beer. This year he’s offering a chocolate one with cocoa beans: Criollo di Domori. Since then, over the past sixteen years, the trend has spread like wildfire, and now many Italian artisan breweries produce excellent examples of Christmas beers. The quality of these beers is, nevertheless, always closely connected to the selection and use of the highest quality raw materials and to the limited quantity produced (and sold until it runs out), beers that are different and unique each year.

This holiday season don’t find yourselves unprepared. Go find these once-in-a-lifetime gems. Who knows? Maybe thanks to these beers we’ll have a nice memory from 2020!

Raise your pints and, as they say in Brussels: