OYSTER STOUT, THE BEER MADE WITH… OYSTERS! 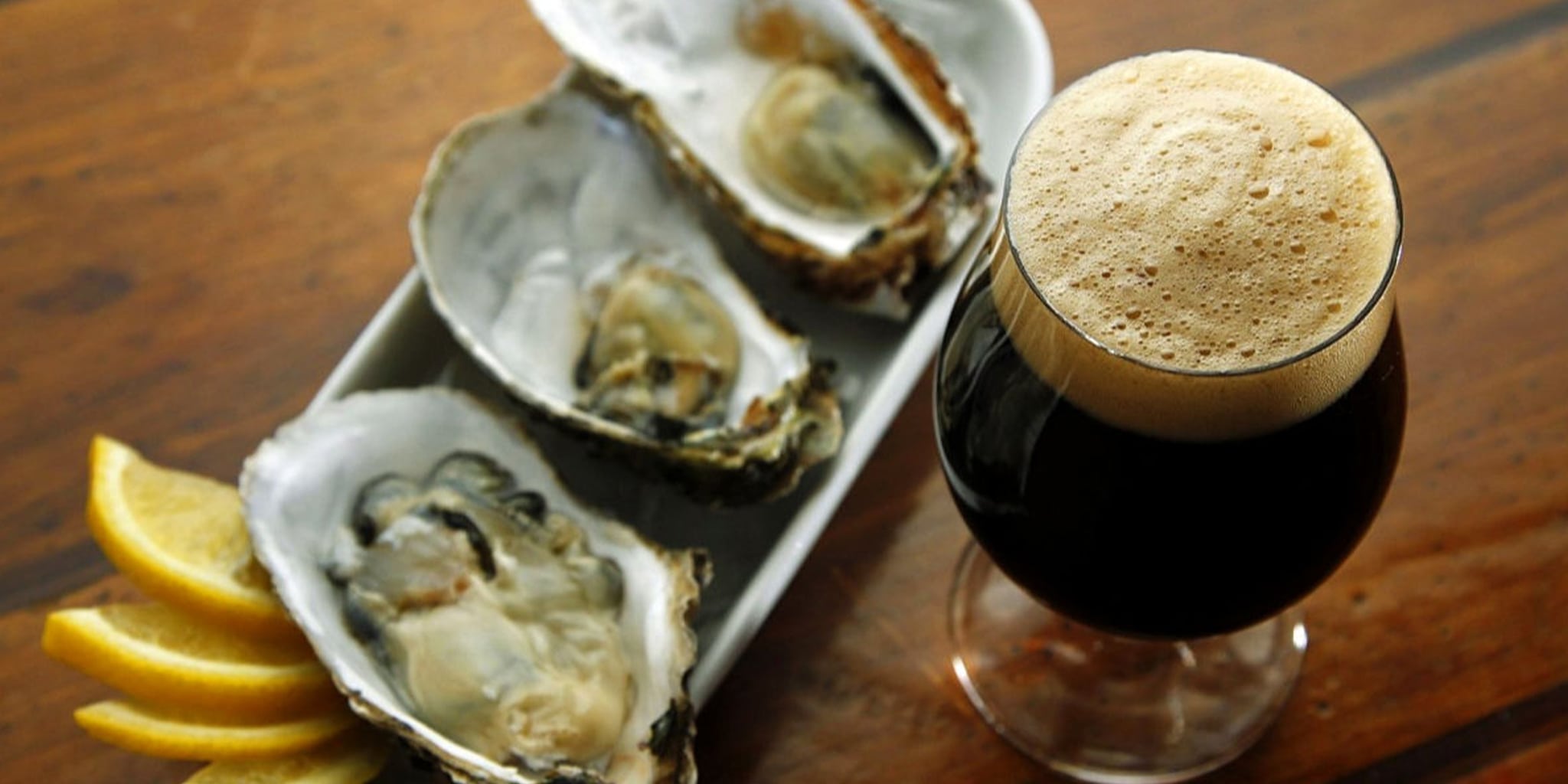 I know, when you think of oysters your mind immediately races to their pairing with champagne. But it wasn’t always like this.

Long before monk Pierre Pérignon made wine mousseux south of the Ardennes, not too far away, on the other side of the English Channel, the English had involuntarily already created an outstanding culinary pairing: beer and oysters.

Before gracing sophisticated and extravagant banquets as the perfect premiére dame, served on a bed of ice, this prestigious bivalve mollusk, the quintessential and iconic symbol of modern luxury-food, had far more humble and modest origins.

PROLETARIANS AROUND THE WORLD, UNITE OVER OYSTERS

I know this is breaking your heart, but it’s true: salty (and nowadays expensive) oysters were the standard budget meal in the United Kingdom, the most common food among the working class at the time.

The next time they charge you €15 for three Bélon oysters, you’ll look at them with thinly veiled disdain, oh… when a love dies.

The reason for this is simple: the cliffs of England were truly teeming with them, and they cost nothing more than the effort of going to get them.

This was true not just on the island of Great Britain, but also in Ireland, France, Belgium, Holland, and all of the Channel Islands.

And what beverage would have accompanied the dinner of a British laborer if not a good stout, impenetrably dark and with an intense toasted aroma.

This beer, today a symbol of Ireland and by the rest of us commonly known as “Guinness-like”, was actually first brewed in London, at the docks, as the official beer of the porters, the dock workers at the port on the Thames.

Rich in flavor, yet affordable, so as to adapt to their means, in just a short time it became very popular among all social classes, sending blonde ale packing.

In the 18th century, oysters were the salted peanuts of today, set out on the bars of pubs and taverns as a snack between one pint and the next.

Consumption was so high that British brewers learned to improve beer by using the crushed shells, which were rich in calcium carbonate. Oysters are a bit like pork, nothing gets thrown away. 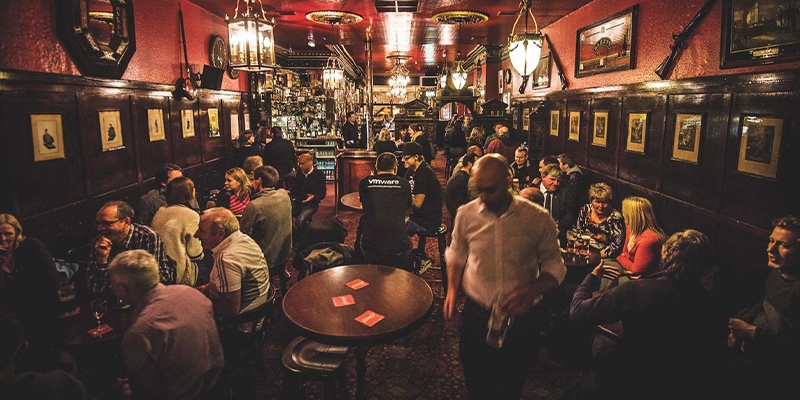 FROM BEER AND OYSTERS, TO OYSTERS IN BEER

It was like this until 1929, when an unknown master brewer from New Zealand decided to put a whole oyster, shell and mollusk, directly into his wort for about thirty minutes during the boiling process.

We don’t know if this was an accident, recklessness, or divine inspiration, but one of the most unconventional beers in history was born: Oyster Stout.

Dark, smooth, and light (4.5%-6%); where sweet and bitter meet sapid and umami, and where, in addition to the usual coffee, chocolate, and caramel flavors, one can recognize iodized and briny notes; basically like a coffee prepared at the seaside.

It wasn’t long before London’s Hammerton brewery, in Barnsbury, duplicated the recipe, bringing it from the former British colony to the capital in 1939.

It was an enormous success as people were already used to drinking stout with oysters.

But, as we know, trends inexorably pass, and pale ales returned once again to the city, declaring the end of stout and all of its descendants, including Oyster.

Furthermore, due to the excessive exploitation and consumption of this beloved shellfish, as well as the consequences of the Industrial Revolution and the waste water that was discarded in the English Channel, the oysters’ habitat experienced an irreversible decline, repositioning them as a luxury food. 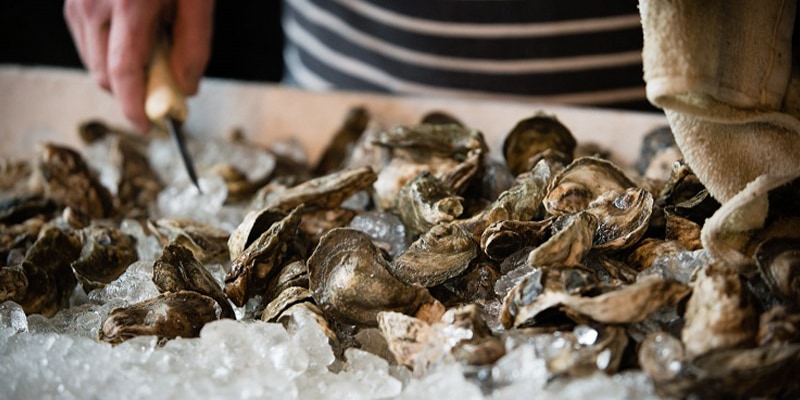 OYSTER STOUT, THE BEER OF IRELAND

The brief, but blinding, meteoric rise of Oyster Stout made landfall on two, less industrialized and decidedly less affluent, nearby islands: Ireland and the Isle of Man, where it became, despite remaining a niche beer, the signature product of the local brewing industry. It was from here, starting in the 1970s, that it won over theUnited States.

While current English beers, like that of Marston’s Brewery in Wolverhampton, keep “oyster” only in the name, as an homage to the past or to suggest a pairing, breweries on the islands and in the United States, like the famous Oyster Stout of the Porterhouse Brewing Company in Dublin, still use the entire oyster.

What about in Italy? I invite you to try two fantastic examples which our country’s renown creativity has produced, obviously with an Italian twist: the first one, “Perle ai Porci”, from the Birrificio del Borgo in Rieti, made with Fin de Claire Breton oysters and Telline del Litorale Romano oysters (part of the Slow Food Movement), and the Milanese one, “Impe Stout”, from the Birrificio Lambrate, with mussels and dulse seaweed.

Would you like one last recommendation? If you happen to be in Dublin, head immediately to the Porterhouse Temple Bar, located in the Porterhouse neighborhood, where every evening, to this day, they serve Oyster Stout paired with high quality oysters.

And as long as you happen to be on the island, remember that every year in September, in the port city of Galway, on the western coast, the Galway International Oyster Festival takes place, the most important event dedicated to these mollusks, where you’ll be able to taste all off the best Oyster Stouts served with oysters.